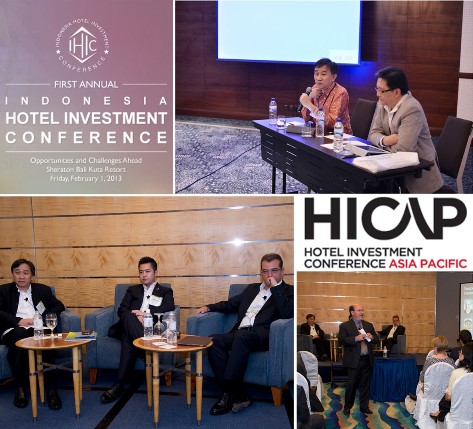 Mr. Tjahjadi joined a panel of experts in hotel investment in Indonesia
during the recent Indonesia Hotel Investment Conference (IHIC) held at the Sheraton Kuta Beach Resort, Bali in February 2013.
The conference focused on various aspects in hotel investment not only from a business perspective but also understanding the role of government in tourism promotion, Infrastructure building, creating a national brand, the sustainability perspective, ownership structures, as well as, challenges in human resources. Mr. Tjahjadi shared his insights in designing budget hotels- which has seen tremendous growth in the past 3 years as the purchasing power of the middle class continues to rise.
In March, Mr. Tjahjadi took part in another conference, the Hotel Investment Conference Asia Pacific (HICAP) held at the Pan Pacific Singapore. Looking at opportunities and challenges in Asia Pacific, the conference presented an interesting mix of panelists from established tourism destinations and upcoming markets. Mr. Tjahjadi, along with the other panelists in the Indonesian Session, described the unprecedented growth in hotel development in budget and upmarket hotels beyond Jakarta and Bali into second and third tier cities. Developers are literally racing against each other as the economy continues to strengthen largely driven by domestic consumer spending. No end to the race in the mid-term!