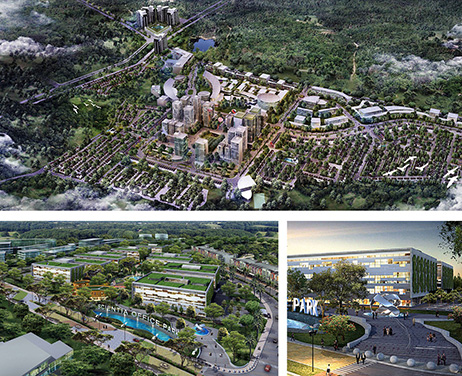 PTI Architects long-standing relationship with one of Indonesia's leading developers, PT Summarecon, brought about the unveiling of its latest master planned development, the Scientia Office Park in November 2012. A 7.1 hectare development in Serpong, Tangerang, it comprises of 6 low-rise office buildings oriented in the north-south axis and interspersed within a network of parks, walkways and courtyards in a campus-like setting. It was planned and designed along environmentally sustainable design principles.
rnCollaboration with PT Summarecon dates back to 2006, when client and architect jointly visited new and upcoming residential developments in Australia, bringing in innovative and novel ideas into the Scientia Master Development Plan. This close coordination led to the master plan and launching of one of Jakarta`s first upscale residential cum leisure developments, the 120-hectare Pondok Hijau Golf in 2007. The partnership continued with the implementation of two more phases of residential and commercial developments of about 350 hectares, the Scientia Garden Phases 1 and 2 in 2008 and 2010 respectively. The Scientia Garden Phase 3 of about 120 hectares and the 27-hectare Scientia Commercial are currently in the drawing boards. The future holds more promising and inventive master planned communities in response to a growing market of practical, adventurous and discerning clientele.