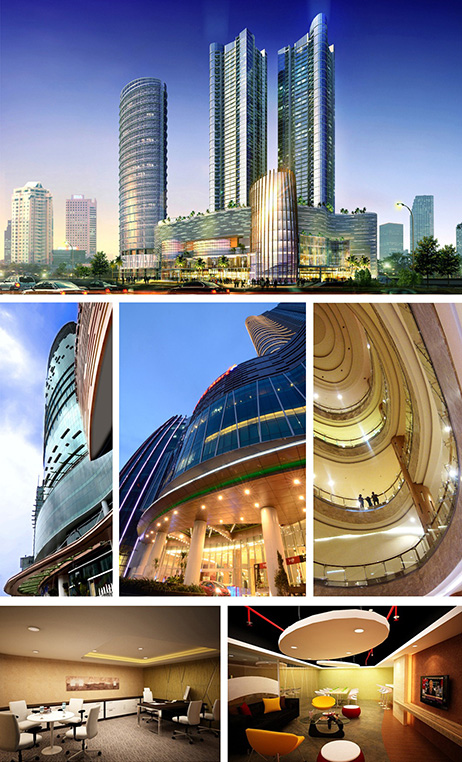 Agung Podomoro`s Kuningan City, a mixed use development officially opened on 12 December 2012. It was designed in collaboration with DP Architects of Singapore, as the concept architect for the base building and interiors. PTI Architects translated and developed the architecture and interior design all the way through construction.
The development consists of two 50-storey residential towers with a combined GFA of 95,000 sqm and a 41-storey office tower of 67,000 sqm. The three towers are on a 10-level podium of 83,000 sqm accommodating retail shops, anchor stores, and food and beverage specialty restaurants.
The podium design veers away from the rigid, square box typical of mall developments in exchange for fluid, organic and graceful forms. The undulating glass cladding provides depth and volume and creates flowing void spaces along the perimeter wall. A ribbed, curved glass tower punctuates the corner of the podium which balances off with the ellipse-shaped office tower on the opposite end. In contrast, these curved forms are used sparingly on the residential tower`s simple and linear facade treatment.