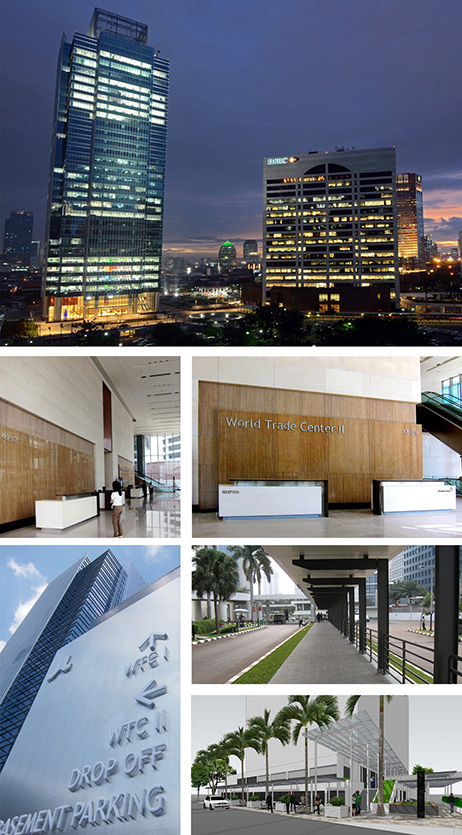 The World Trade Center II is strategically located at Jakarta Land`s Metropolitan Complex along Jl Jenderal Sudirman, within Jakarta`s CBD. It opened its doors to new tenants and started operations in October 2012. This latest addition to the Metropolitan Complex was designed in association with Aedas Singapore. PTI Architects, as the architect-of-record was responsible for design development and documentation of the base building, interiors of the main lobby, and fully-designed and documented the wayfinding signages.
A 30-storey, grade A office building of about 61,000 sqm, it is fitted with world class facilities, amenities, support infrastructure and security managements systems. It has a square-ish central core plan with columns along the perimeter, offering maximum flexibility and efficiency in space utilization. As one enters the main lobby, one experiences a sense of understated elegance, space and lightness, echoing the same expression of the exterior.
The simple and sleek facade design with double - glazed cladding enveloping its structure effects a reduced heat load and consequently, contributing to energy efficiency. Other green and innovative features were incorporated to its design to increase building performance. It was awarded the Green Mark`s Gold Rating from the Singapore`s Building and Construction Authority, making it a truly certified sustainable building in Indonesia.